Provide the flexibility of building your app using one universal language for multiple smartphone platforms. 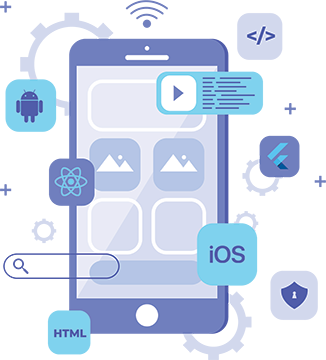 Cross-Platform application is an application built both to run on different operating systems, and to use different programming languages. Cross-platform application has become very common due to the growing popularity of open source code and programming languages such as Java, HTML5, Javascript etc. They can be installed on a computer running Windows, macOS, or Linux. This is where the name cross-platform comes from: you will find the app in some cases for free in all three operating systems. You may wonder, aren't most applications already cross-platform?
Well, most software is written in one programming language and then compiled into binary code that is almost machine-dependent. In this case, we can say that the application is platform dependent. When it comes to mobile apps, they are often tied to a single operating system. For this reason, developers need to publish the app for each platform separately. What's more, the app must be tweaked for each OS release if it requires updating to cover new features.

Types of Cross-Platform App Development Technologies
Cross-Platform development is done by writing the code once and compiling it for the different platforms, or by using a software framework (sometimes called a cross-platform toolkit) that simplifies coding and provides compatibility with individual operating systems.

There are various cross-platform technologies that are used such as Ionic, PhoneGap, Xamarin, Titanium, Flutter, React Native as well as many more. Depending on the features you install, you will have a framework available to assist you. With a number of technologies ready to help the development of your application, you will be easily able to integrate various components. 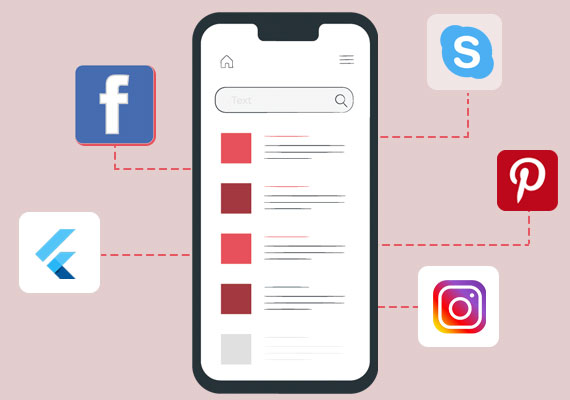 What is a React Native Application?
React native application is an application developed with React Native library and built using Xcode or Android Studio to ensure compatibility with both platforms and cross-platform deployment. It compiles into native executable.
React native app is written using a JavaScript programming language that runs on the web to provide a different kind of application than one built on Swing, HTML/CSS, or Apache Flex. React Native has many features that make it easy for programmers to build responsive apps for iOS and Android devices.
Why Should You Choose React Native For Your Next Mobile App?
A question that comes up often for many React Native developers is, "why choose React Native?" As this post will explain, the reason is because of its impressive speed and versatility in the mobile industry. Reusability and flexibility are key features of React Native that allow you to create multiple applications with one codebase.
As technology advances, companies increasingly rely on web-based technologies like JavaScript to run their apps on mobile devices. React Native is a JavaScript framework that is compatible with both iOS and Android. It enables you to design your mobile app's front end using JavaScript, which means you don't have to learn Swift or Java for iPhone app development.
As any React Native App Development Company will guarantee, React Native provides native APIs that make it easy for developers to integrate user interface components from the device's operating system (e.g., OS-specific buttons, screen transitions, etc.) into their apps. It also allows you to use wrappers around core components from Expo (e.g. Camera, Navigation) that accelerate development, and generate runnable bundles for production.
React Native is much faster than legacy technologies as it uses native components in the same manner as other apps. Once you've optimized the front end for speed, it's easy to move the rest of your app to React Native and tweak the backend code (e.g. the neural network code) for multiple platforms.
When compared to the traditional native approach, separate cross-platform application development services for two platforms increases costs and interferes with the speed of product development. This can lead to higher costs, less agility, more bugs, and more time-consuming development. By leveraging React Native's features and efficiency, your company can be more agile and competitive in the marketplace.
In addition to performance and development speed, React Native enables you to create experiences that are indistinguishable from their native counterparts.
Benefits of React Native App Development Services
The React Native framework has become increasingly popular in recent years because it enables simultaneous support for both platforms, putting an end to the debate among mobile developers over whether to write for iOS or Android. React Native app development has the following advantages:
And many more. 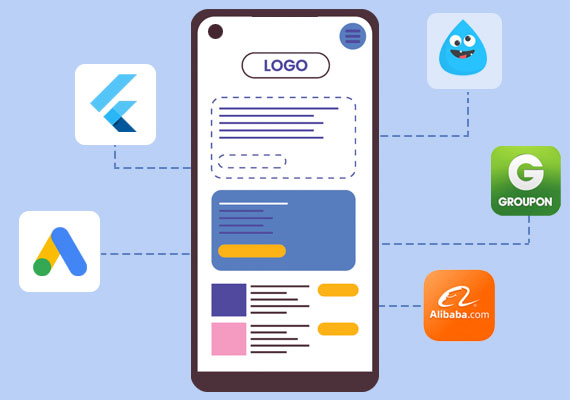 What is Flutter Application?
Flutter application is a change in the way apps are developed; meaning that, in most cases, it comes with advanced features such as 3D graphics and animations. Currently, it's being used by companies such as Google and Facebook. As a result of this new concept in development, the apps look and feel more advanced. This is a great advantage for them because it attracts millennials, therefore increasing the number of customers.
In fact, the app market is on the rise with different new apps being released every day which are full of features that are beneficial to users. Hiring Flutter app development services is an ideal solution for companies looking to attract customers through these enticing features in their apps.

What Kind Of Apps Can You Build With Flutter?
You can build a wide variety of apps using Flutter. Everything from games and entertainment to productivity, social media, and collaborative applications, like Slack. We’ve even managed to build Google Ads for both iOS and Android with it!

Here are just some of the things you can create with Flutter:
And literally many more! It’s a great platform for building any kind of mobile app.

Benefits of Flutter App Development Services
There are many benefits of using the Flutter framework for your next application. Companies who want to use these alluring qualities in their apps to draw clients can hire Flutter app development services.
- Speed: Flutter-based applications load up quickly, thanks to its use of GPU graphics rendering and its support for natively compiled Kotlin code.
- Stability: This framework also eliminates a number of crashes experienced by developers when using other tools, since it includes Google’s Dart programming language and the Kotlin compiler.
- Visual Design: Flutter’s widget-based framework provides flexibility for designers to create beautiful apps without sacrificing performance.
- Support: For those developers who know Dart, Kotlin or Java, Flutter is an attractive option since it allows them to use their preferred language for development. It also supports Android Studio, Intellij IDEA and Visual Studio Code as development environments.
- Integration: Flutter-based applications can easily integrate with the native platform APIs of both iOS and Android. It also integrates well with Material Design for Android, as well as iOS UIKit for iOS.
- Accessibility: This framework is cross-platform, meaning it can be used to create apps for any mobile device running a supported operating system or that use web browsers. 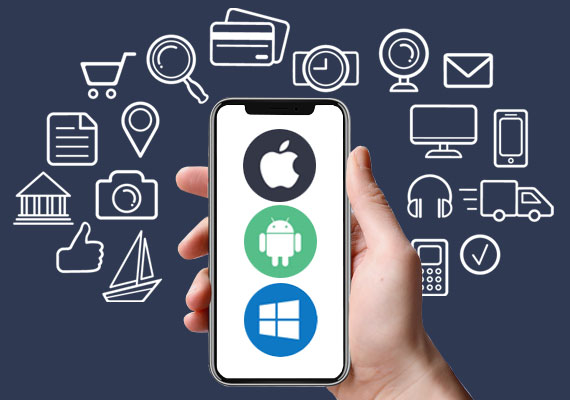 Why Choose Webmantra As Your Cross-Platform App Development Company?

With various new technologies emerging, we are also witnessing a rapid change in the way how applications are being designed. Companies are now relying on cross-platform technology to simplify their application development and deployment process. Cross-platform technology is a group of methods for computer programming that allow software developers to create one code base that can run multiple operating systems and hardware platforms simultaneously.


Webmantra, as a Cross-Platform App Development Company in India, has the capability to provide you with cross platform and cross-browser solutions. In today's age, this is not an easy task to achieve considering the complexity involved with reaching out to different mobile platforms.
By using our cross-platform app development services, you will be able to reach out to the web, desktop, mobile and add-on in one go. Apart from that, our core expertise in developing cross-platform applications also lies in developing apps for your business objectives by making use of the quickly evolving technologies. By doing so, we can easily help you make better use of your resources and effectively gain a competitive edge over other companies. Our apps are being used by some of the most reputed organizations across the world.

We'd love to hear from you! Get a free quote from us 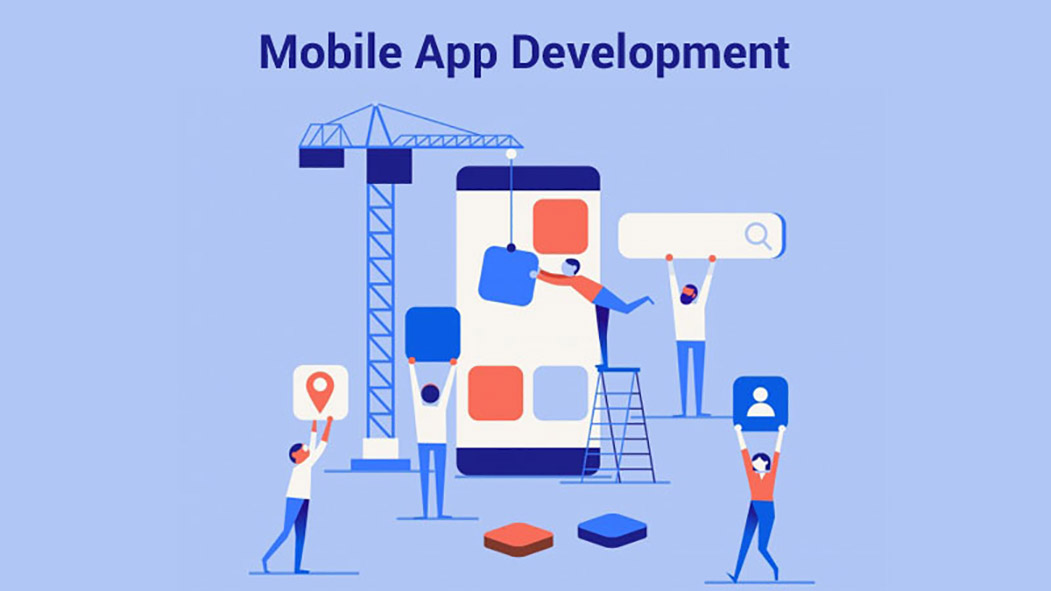 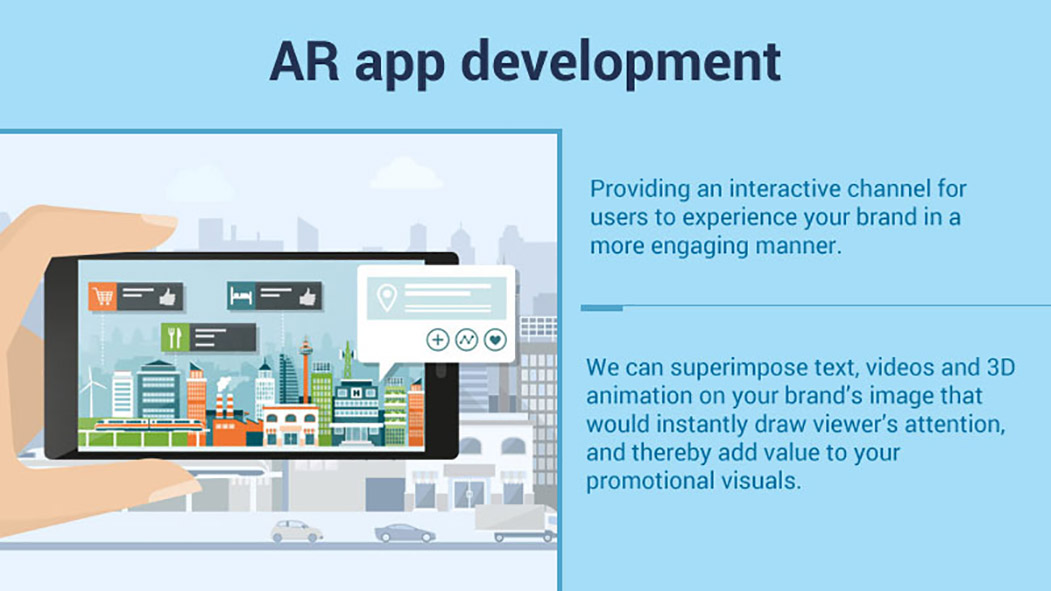